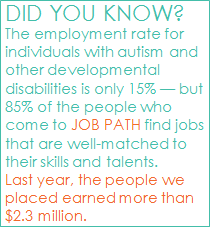 Turning NO into YES for more than 40 years.

JOB PATH was established in 1978 to find ways to help young adults and adults with autism and other developmental disabilities join the workforce.

JOB PATH was a pioneer: the first effort of this kind in New York State and one of the first in the country. Today our programs help people find jobs, live in their own homes, and contribute to community life.

On March 29, 2018, the NYC Mayor’s Office for People with Disabilities and the Consortium for Customized Employment, a project of Job Path, honored three NYC employers that made positive contributions to people with developmental disabilities.

The following were presented with The Don Taft Customized Employment Award 2018:

Job Path is deeply grateful for the generosity of our donors and partners. Everyone involved contributed in making this year’s gala another great success.

There is a job for everyone.
When he graduated in 1992, Eric Doughty was denied enrollment in a sheltered day program because he was deemed “too loud” and “too compulsive.” But his mother, Geri Smith, was just as glad because she believed her son could hold a job. So through a special project with his school, Job Path set out to prove her right.

Our job developer literally knocked on doors in Eric’s Rockaway

neighborhood until she found Park Nursing Home and convinced director Pat Russell to meet Eric. Geri almost couldn’t believe it when Mr. Russell told Eric, “Just make sure you are on time and wear a clean uniform.” _Working as a dietary assistant three days a week–stacking and cleaning trays –Eric has been on time and in a clean uniform for 25 years. Now he lives in his own apartment, with help from his family and Job Path, especially Tracey Ramdehal, who has supported Eric for more than 14 years.
_Recently Geri hosted a 25th anniversary party for Eric. More than 50 past and present co-workers–some with their families–filled the backyard of her home. Geri says, “The staff has always made sure that Eric doesn’t fail. They keep him safe and help him stay focused.”
Mr. Russell, who spotted Eric’s work ethic right from the start, added:
“I wish everyone was as happy and delighted to be at work as Eric is.”

At the Interagency Council, June 9th, Crecida Norris was recognized as one of the field’s “shining star” Direct Support Professionals. Crecida has been at Job Path since 2004. Every day since then she’s devoted herself to the people she supports. They’ve become shining stars, too, because of the thoughtful support she provides and the deeply caring relationships she’s developed with them and their families. As her supervisor Maureen Martinez says,  “Crecida lives out the meaning of love.”  Job Path truly appreciates her hard work and dedication.

In celebration of Developmental Disability Awareness Month in March, the NYC Mayor’s Office for People with Disabilities (MOPD) and the Consortium for Customized Employment (CCE), a project of Job Path, honored four employers for their positive impact on the lives of New Yorkers with disabilities. The honorees were:

Thanks to all who participated in making this a success